Justin Herbert is an American football quarterback for the Oregon Ducks. Entering his true freshman season listed as QB2 on the depth chart, Herbert became the first true freshman at Oregon to start at Quarterback since Chris Miller in 1983 when the Ducks took on arch-rival Washington on October 8, 2016. Born on March 10, 1998 in Eugene, Oregon, to parents Holly and Mark Herbert, his grandfather, Rich Schwab, played receiver at Oregon in the 1960s. Herbert attended Sheldon High School in Eugene, Oregon where he lettered in varsity football, basketball, and baseball. 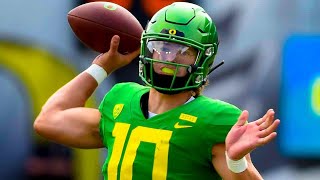 Justin Herbert Facts:
*He was born on March 10, 1998 in Eugene, Oregon, USA.
*He played varsity football at Sheldon High School in Eugene, Oregon.
*He played the quarterback position for the University of Oregon.
*He became the first true freshman at Oregon to start at quarterback since 1983.
*He has led Oregon to an average of 38.3 points per game over his 28 career starts.