Kaho is a Japanese actress and fashion model. She is known for her roles in television, such as Socrates in Love, The Queen’s Classroom, The Diplomat Kosaku Kuroda, Minna! ESPer Dayo!, Love Song, Tokyo Vampire Hotel, Foreboding, and The Many Faces of Ito, and in the films Gamera the Brave, A Gentle Breeze in the Village, Utatama, Kinako, Puzzle, Our Little Sister, Pink and Gray, and Memoirs of a Murderer. Among her awards, she has won a Hochi Film Award, a Nikkan Sports Film Award, and a Japan Academy Prize. Born Kaho Indo on June 30, 1991 in Tokyo, Japan, she has one younger twin brother. Kaho was discovered in Harajuku (Omotesando) when she was in 5th grade, and began her career as a model for Japanese teen magazines. From 2003 to 2005, she modeled for the teen fashion magazines Pichi Lemon and PurePure. She made her debut in 2003 in a television commercial for mobile phone company TU-KA. 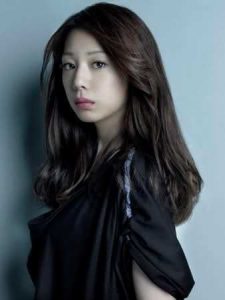