Kajal Aggarwal is an Indian film actress and model who appears mainly in Telugu, Tamil, and Hindi films. She is best known for her roles in the films Chandamama, Magadheera, Darling, Mr. Perfect, Singham, Govindudu Andarivadele, Thuppakki, Maari, Businessman, Baadshah, and Brindaavanam. She has also starred in the films Naayak, Temper, Khaidi No. 150, Naan Mahaan Alla, Naan Mahaan Alla, Maattrraan, Jilla, Vivegam, and Mersal. Aggarwal made her web television debut with the Tamil-language series Live Telecast (2021). She is the recipient of various accolades. 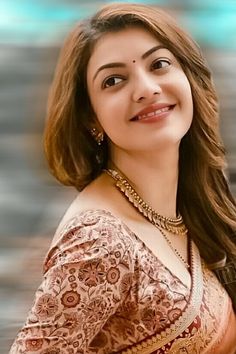 Born on June 19, 1985 in Mumbai, Maharashtra, India, to parents Suman and Vinay Agarwal, Kajal has a younger sister Nisha Aggarwal, who is also an actress. She was educated at St. Anne’s High School, Jai Hind College, and Kishinchand Chellaram College. Kajal married businessman Gautam Kitchlu on October 30, 2020, in Mumbai in a private ceremony.

Kajal Aggarwal Facts:
*Born on June 19, 1985 in Mumbai, Maharashtra, India, she is of Punjabi descent.
*She made her debut in the Hindi film Kyun! Ho Gaya Na… (2004).
*She played Mithravindha Devi / Indira in the high budget Telugu historical drama Magadheera (2009), alongside Ram Charan Teja.
*She received CineMAA Award for Best Actress for the 2010 movie Brindaavanam.
*In 2020, a wax figure of Aggarwal was put on display at Madame Tussauds Singapore, making it the first of an actress from South Indian cinema.
*She is the brand ambassador for Celebrity Cricket League.
*Follow her on Twitter, YouTube, Facebook and Instagram.