Kara DioGuardi is an American songwriter who writes music primarily in the pop rock genre. She has collaborated with popular music artists such as Christina Aguilera, Britney Spears, Jesse McCartney, Nick Lachey, Kelly Clarkson, Pink, Ashlee Simpson, and many others. She has also written for films and television series, including Camp Rock, Camp Rock 2: The Final Jam, Glee, Jonas, Raise Your Voice, and Hannah Montana. Her accolades include BMI Pop Songwriter of the Year Award, NAMM Music For Life Award, and NMPA Songwriter Icon Award. She worked as a judge on American Idol for its eighth and ninth seasons, and was a head judge on the Bravo singer-songwriter competition series Platinum Hit in 2011. Born Kara Elizabeth DioGuardi on December 9, 1970, in Ossining, New York, to parents Carol and Joe DioGuardi, she grew up in New Rochelle, New York. She is of Italian and Albanian descent. Following her high school graduation, she attended Duke University where she earned a degree in political science. Her first breakthrough hit as a songwriter came with the UK number-one single “Spinning Around”, performed by Kylie Minogue. In July 2009, she married her boyfriend of 2 years teacher and general contractor Mike McCuddy following a 6-month-long engagement. They have a son named Greyson James Carroll. 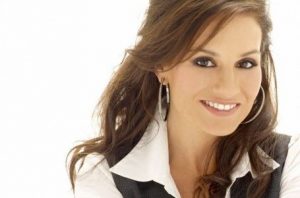 Kara DioGuardi Facts:
*She was born on December 9, 1970, in Ossining, New York.
*She is a 1993 graduate of Duke University.
*Her songs appeared on albums that combined sold more than 160 million worldwide.
*She has a pet chihuahua.
*Visit her official website: www.karadioguardi.com
*Follow her on Twitter and Facebook.