Karen Mulder is a Dutch model and singer, best known for her work with Versace, Dior, and Chanel as a supermodel during the 1990s. Mulder appeared in the 1997 and 1998 Sports Illustrated Swimsuit editions and was also a Victoria’s Secret model. She has also appeared on the covers of major international magazines including Vogue, Elle, and Cosmopolitan. 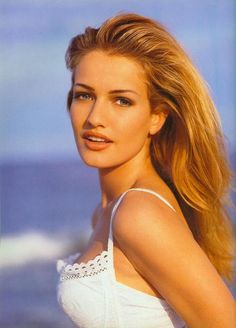 Born on June 1, 1970 in Vlaardingen, Netherlands, to parents Marijke and Ben Mulder, she is the older sister of actress Saskia Mulder. Karen was discovered through the 1985 Elite’s Look of the Year modeling contest and within a couple years was modeling for many of Europe’s top designers. She gained Supermodel status and recognition through the 1990’s with repeated covers on Vogue and a number of high profile advertising campaigns. Mulder was married to French photographer René Bosne from 1988 to 1993.

Karen Mulder Facts:
*She was born on June 1, 1970 in Vlaardingen, Netherlands.
*She signed with Victoria’s Secrets in 1992.
*She appeared in five Victoria’s Secret Fashion shows from 1996 through 2000 and serving as a Victoria’s Secret Angel from 1997 to 2000.
*She speaks Dutch, English, French, German, Latin, and Greek fluently.
*She was in a coma at the American Hospital in Neuilly after an attempted suicide in 2002.
*Her favorite movie is Roman Holiday (1953).
*Her hobbies include traveling, singing, painting, reading and watching movies.