Katarzyna Kawa is a Polish professional tennis player who achieved a career-high singles ranking of World No. 112 on 9 November 2020, and a doubles ranking of world No. 139 on 14 June 2021. Turning professional in 2007, Kawa has won one WTA Challenger doubles title. She has also won seven singles and 16 doubles titles on tournaments of the ITF Circuit. 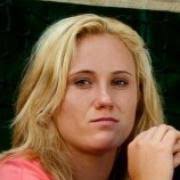 Katarzyna Kawa Facts:
*She was born on November 17, 1992 in Krynica, Poland, to Parents Anna and Jacek.
*She began playing tennis at age 7 and is coached by Grzegorz Garczyński.
*She turned professional in 2007.
*Her idols are Justine Henin and Novak Djokovic.
*Her favorite shot is backhand and her favorite surfaces to compete on are both clay and grass.
*Her hobbies include traveling and reading.