Kate Bock is a Canadian fashion model, best known for her appearances in the Sports Illustrated Swimsuit Issue. She has appeared on the cover or been featured in many international fashion magazines including Elle, Maxim, Ocean Drive, Fitness, Elle Canada among others. She also modeled for Victoria’s Secret. Born Kate Lynne Bock on January 30, 1993 in Vancouver, Canada, Bock was discovered at a local swimming pool at the age of 12. She was educated at West Vancouver Secondary School. Following her high school graduation, Bock moved to Paris to pursue her modeling career further. In 2016, she began dating American basketball player Kevin Love. 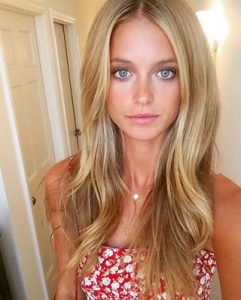 Kate Bock Facts:
*Born on January 30, 1993 in Vancouver, Canada, she has a brother named Ian and a sister named Anna.
*She was scouted by a modeling agent at a swimming pool at the age of 12.
*She was voted Sports Illustrated Rookie of the Year after in 2013.
*She appeared on the cover of the 2020 issue alongside Olivia Culpo and Jasmine Sanders.
*She was featured on the music video to the song Jack Sparrow by comedy troupe The Lonely Island in 2011.
*She is fluent in French.
*Visit her official website: www.katebock.com
*Follow her on Twitter and Instagram.