Salli Richardson is an American actress and director. She is best known for her portrayal of Angela in the film A Low Down Dirty Shame and for her role as Dr. Allison Blake on the Syfy comedy-drama series Eureka. From 1999 to 2002, Richardson starred as Viveca Foster on the CBS series Family Law and had recurring roles as Nancy Adams on Rude Awakening, and as Laura on CSI: Miami. She also provided the voice of Elisa Maza on animated series Gargoyles. Her well-known films include The Great White Hype, Antwone Fisher, Pastor Brown, Black Dynamite, I Will Follow, Anacondas: The Hunt for the Blood Orchid and I Am Legend. Born Salli Elise Richardson on November 23, 1967 in Chicago, Illinois, to parents Marcia and Duel Richardson, she is of Italian and English descent on her father’s side, and of African American and Native American descent on her mother’s side. She has three brothers Nalin, Chad, and Josh. She started her professional acting career in the theater at the Kuumba Workshop in Chicago. In 2002, Richardson married actor Dondre Whitfield. They have two children: a daughter and a son. 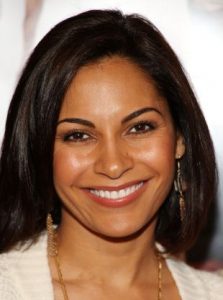 Salli Richardson Facts:
*She was born on November 23, 1967 in Chicago, Illinois, USA.
*Her parents are Marcia Harris and Duel Richardson.
*She played tennis for the University of Chicago Laboratory High School.
*Follow her on Instagram.