Kate Bolduan is an American journalist and news anchor who is the anchor of At This Hour with Kate Bolduan. Previously, she was an anchor for the CNN program State of America with Kate Bolduan on CNN International, New Day, and The Situation Room. She also served as congressional correspondent based in Washington, D.C. as well as a general assignment correspondent for the network. Bolduan is a Democrat. Born Katherine Jean Bolduan on July 28, 1983 in Goshen, Indiana, in the family of medical professionals Jeffrey and Nadine Bolduan, Kate is the third of four daughters. She attended Goshen High School, a public high school in her home city, and graduated Phi Beta Kappa in 2005, with a bachelor’s degree in journalism from George Washington University. She began her television career as a production assistant for NBC News and MSNBC in Washington D.C. She married her husband Michael David Gershenson in May 2010. They have two daughters. 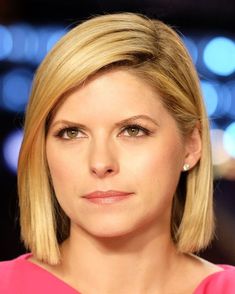 Kate Bolduan Facts:
*She was born on July 28, 1983 in Goshen, Indiana, USA.
*She is the third of four daughters born to medical professionals Jeffrey and Nadine Bolduan.
*She graduated with honors from George Washington University in 2005.
*She walked on to the women’s volleyball team during her time at the university.
*She worked as a general assignment reporter for WTVD-TV in Raleigh, North Carolina from 2005 to 2007.
*She began her tenure in 2007 at CNN as a national correspondent for CNN Newsource.
*She is left-handed but plays all sports with her right hand.
*She loves ketchup, belly dancing, cereals and can waterski barefoot.
*Follow her on Twitter, Facebook and Instagram.