Bonnie Wright is an English actress. She is best known for her portrayal of Ginny Weasley in the Harry Potter film series based on the novel series of the same name by J. K. Rowling. She portrayed the role of Rose the young nursemaid in 2013 British-Irish drama film The Sea, based on a John Bansville novel. Born Bonnie Francesca Wright on February 17, 1991 in London, England, to jewelers Gary Wright and Sheila Teague, she has an older brother named Lewis. She was educated at King Alfred School in North London and studied film and television at University of the Arts: London College of Communication. She was once engaged to fellow Harry Potter actor Jamie Campbell Bower. 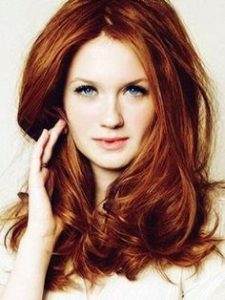 Bonnie Wright Facts:
*She was born on February 17, 1991 in London, England, UK.
*Her parents are Sheila Teague and Gary Wright, who owned a jewelry company called Wright & Teague.
*She graduated from London’s University of the Arts: London College of Communication.
*She debuted in Harry Potter and the Sorcerer’s Stone (2001) as Ron Weasley’s little sister Ginny Weasley.
*She earned a Rodial Award for Most Edgy Look for her portrayal in Harry Potter and the Deathly Hallows.
*She is the owner of her own production company called Bon Bon Lumiere.
*She can sing and play the piano, and plays soccer and surfs.
*Her favourite actress is Nicole Kidman.
*She is close friends with her “Harry Potter” co-star Emma Watson.
*She is an ambassador for a charity, called Lumos, which was founded in 2005 by Lumos Founder and Life President J.K.Rowling.
*Visit her official website: www.bonbonlumiere.com
*Follow her on Twitter, Facebook and Instagram.