Kate Mara is an American actress. She is most famous for portraying Zoe Barnes on the Netflix series House of Cards and as Sue Storm in the 2015 version of Fantastic Four. Her other movie credits include Transcendence, Shooter, The Martian, The Open Road and Brokeback Mountain. Born as Kate Rooney Mara on February 27, 1983 in Bedford, New York, she is one of four children to Kathleen McNulty Rooney and Timothy Christopher Mara. She is of Irish, French-Canadian, and German descent on her father’s side, and of Irish and Italian descent on her mother’s side. Her younger sister, Rooney Mara, is also an actress. After graduating from Fox Lane High School in Bedford, New York, she enrolled into Tisch School of the Arts at New York University to study musical theater, but left to focus on her acting career. She was engaged to her longtime boyfriend Jamie Bell in January 2017. They married on July 17, 2017. 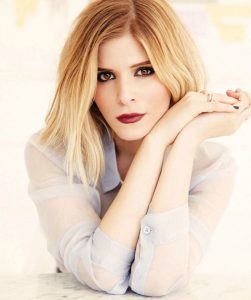 Kate Mara Facts:
*She started acting at the age of 9.
*She was “painfully shy” while growing up.
*She is a skilled dancer. She knows ballet, jazz and tap.
*She has two Boston Terriers, Lucius and Bruno.
*She is a fan of New York Giants and Pittsburgh Steelers.
*She was in a relationship with Max Minghella from 2010 to 2014.
*Follow her on Twitter and Instagram.