Kate Mulgrew is an American actress. She is best known for her portrayal of Captain Kathryn Janeway on the 1990s television series Star Trek: Voyager, and for her role as Galina “Red” Reznikov on the Netflix comedy series Orange Is the New Black. Kate’s other notable works include Ryan’s Hope, Mrs. Columbo, HeartBeat, Daddy, Man of the People, The Black Donnellys, Mercy, Warehouse 13, NTSF:SD:SUV::, and Mr. Mercedes. Her theater credits include Another Part of the Forest, Tea at Five, Mary Stuart, The Exonerated, and Equus. In 2017, she provided her voice for Dr. C in the animated series Stretch Armstrong and the Flex Fighters. Kate is the recipient of various accolades including; a Critics’ Choice Award, a Saturn Award, an Obie Award and three Screen Actors Guild Awards. She has also received Golden Globe Award and Primetime Emmy Award nominations. Born Katherine Kiernan Maria Mulgrew on April 29, 1955 in Dubuque, Iowa, USA, into a large Irish Catholic family, to Joan Virginia and Thomas James Mulgrew, her siblings are Tom Mulgrew, Joe Mulgrew, Jenny Mulgrew, Laura Mulgrew and Sam Mulgrew. She was educated at Wahlert High School in Dubuque and was accepted at the Stella Adler Conservatory of Acting in New York at age 17. Kate first came to prominence with the role of Mary Ryan on the daytime soap opera Ryan’s Hope. She was married to Robert H. Egan from 1982 to 1995 and Tim Hagan from 1999 to 2014. Kate is the parent of two children. 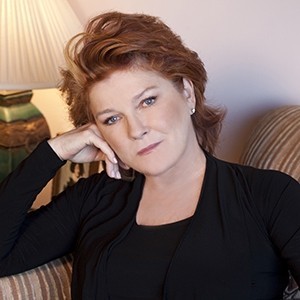 Kate Mulgrew Facts:
*She was born on April 29, 1955 in Dubuque, Iowa, USA.
*She made her film debut in the fantasy romance movie Lovespell (1981).
*She used to work as a waitress in New York City, to earn some extra money to keep herself financially afloat.
*She is a devout Roman Catholic.
*She was friends with the late John Kennedy Jr. and attended his funeral with husband Timothy Hagan.
*She is good friends with fellow Star Trek alumnus John de Lancie (“Q”).
*She is an avid fighter against Alzheimer’s disease.
*She owned a chocolate colored labrador called Gracie.
*Helen Gallagher is her acting mentor.
*Visit her official website: www.thekatemulgrew.com
*Follow her on Twitter, Tumblr, YouTube, Facebook and Instagram.