Katharine Isabelle is a Canadian actress. She is famous as a scream queen for her appearances in various horror films. She is best known for her role as Ginger Fitzgerald in the Ginger Snaps film series. Her other roles in horror films include Freddy vs. Jason, American Mary, Another Cinderella Story, and 30 Days of Night: Dark Days. Born Katharine Isobel Murray in Vancouver, British Columbia, she is the daughter of Graeme, an art director and production designer who has won two Emmy Awards for his work on the television series The X-Files, and Gail Murray, an amateur Vancouver writer and producer. She is the sister of former child actor and journalist Joshua Murray. 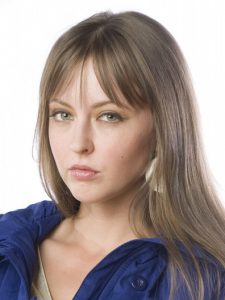 Katharine Isabelle Facts:
*She made her film debut as a child in Cousins (1989).
*She is the sister of former child actor and journalist Joshua Murray.
*She has two dogs, Apple and Spaghetti.
*She is considered a modern day Scream Queen.
*Apocalypse Now (1979) is her favorite film.
*Official Website: www.katharine-isabelle.co.uk