American actress, film producer and former fashion model, Katherine Heigl is most famous for her portrayal of Dr. Izzie Stevens on Grey’s Anatomy, for which she won the Primetime Emmy Award for Outstanding Supporting Actress in a Drama Series in 2007. She can also be recognized for her role as Isabel Evans in TV series Roswell from 1999 to 2002, and as Alison Scott in the 2007 comedy film Knocked Up. Born Katherine Marie Heigl on November 24, 1978 in Washington, D.C., she was raised as a Mormon. She is the daughter of Nancy and Paul Heigl, and has two older brothers, John and Holt; and an older sister, Meg Heigl-Beltran. She is a 1996 graduate of New Canaan High School. She has been married to Josh Kelley since 2007. They have three children. 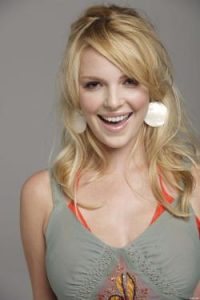 Katherine Heigl Facts:
*She began her career as a child model with Wilhelmina Models.
*She used to play cello while in High School.
*She placed number 72 in Stuff magazine’s “102 Sexiest Women In The World” in 2002.
*She was voted as #1 in 2008’s Askmen.com “Top 99 sexiest women in the world” poll.
*Her publicists are Catherine Olim and Jill Fritzo.
*She was ranked #19 in FHM magazine’s “100 Sexiest Women in the World 2006” supplement.
*Follow her on Twitter, Facebook and Instagram.