Daniel Ricciardo is an Australian racing driver who races in Formula One for Red Bull Racing. In 2009, he won the British Formula 3 Championship, and won the Canadian Grand Prix in 2014. He began racing in karts series at the age of nine. He entered Formula Ford in 2005. He was born Daniel Joseph Ricciardo on July 1, 1989 in Perth, Western Australia to Joe and Grace Ricciardo. He has one sister, Michelle Ricciardo. 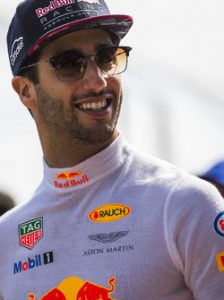 Daniel Ricciardo Facts:
*He first competed in Formula One in 2011.
*The fourth Australian driver to win a Formula One Grand Prix.
*He is a supporter of Australian football club West Coast Eagles.
*He is a keen collector of cars; including a 1963 Porsche 911, 1973 Ferrari Dino 246GT, and Ferrari F40.
*Follow him on Twitter, Facebook, YouTube, and Instagram.