Kathinka von Deichmann is a Liechtensteiner professional tennis player who achieved a career-high singles ranking of World No. 153 on October 8, 2018, and a doubles ranking of world No. 343 on July 17, 2017. Turning professional in 2009, Von Deichmann has won 14 singles and four doubles titles on the ITF Circuit. She made her WTA Tour debut at the 2014 Nürnberger Versicherungscup in doubles, partnering Yvonne Meusburger. She made her Grand Slam debut at the 2018 US Open. 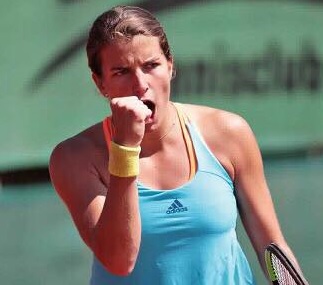 Kathinka von Deichmann Facts:
*She was born on May 16, 1994 in Vaduz, Liechtenstein.
*She began playing tennis at the age of six.
*She plays right-handed and one-handed backhand.
*She turned professional in 2009.
*She won her first ITF tournament in Coimbra, Portugal in 2012.
*She has a career-high singles ranking of No. 153.
*Visit her official website: www.kathinkavondeichmann.com