Kathy Griffin is an American stand-up comedian best known for her trademark rapid fire wit and her capability to fast-talk on any subject. She stars in the Emmy winning reality show , ‘Kathy Griffin: My Life on the D-List’ (2005). Her first comedy album For Your Consideration reached the Top Comedy Albums chart of Billboard. Kathy was born Kathleen Mary Griffin on November 4, 1960 in Chicago, Illinois, USA to Maggie and John Griffin. She has Irish ancestry. She has three older brothers and an older sister. 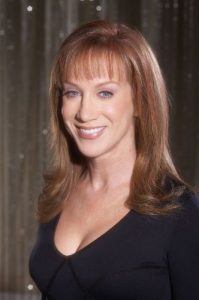 Kathy Griffin Facts:
*She is the first female comedian to debut at the top of the Billboard Top Comedy Albums chart.
*She worked in the Oak Park Hospital as a cashier.
*She supports LGBT rights and same sex marriage.
*She is close friends with actor Jonathan Bennett, Catherine Bell and CNN’s Anderson Cooper.
*Follow her on Twitter, Facebook, YouTube, and Instagram.