Dancer, actress and choreographer Carrie Ann Inaba is best known for her act in ABC TV’s Dancing with the Stars. She hosted the game show 1 vs. 100. She began her career as a singer in Japan. She was born on January 6, 1968 in Honolulu, Hawaii, USA to Rodney and Patty Inaba. She is of Japanese, Chinese, and Irish descent. 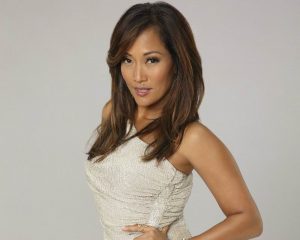 Carrie Ann Inaba Education:
She attended and graduated from Punahou School in Honolulu, Hawaii, USA. (1986)
She graduated with a B.A. in world arts & cultures from UCLA.