Katie Pavlich is an American journalist, author and television personality. She is best known for her work at Townhall.com and The Hill. As a political commentator, she has appeared for several television networks, most notably on the Fox News Channel program The Five. She is the author of the New York Times Best Seller Fast and Furious: Barack Obama’s Bloodiest Scandal and Its Shameless Cover-Up. Born Catherine Merri Pavlich on July 10, 1988 in Arizona, she was raised in rural Arizona and has described herself as a Daughter of the American Revolution. She belongs to German, Irish, Croatian, and Australian descent. She has one brother, who is an engineer. She is a University of Arizona graduate with a degree in broadcast journalism. She was chosen as Blogger of the Year by CPAC in 2013. 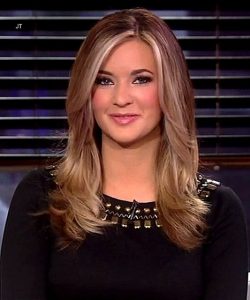 Katie Pavlich Facts:
*Her father is a teacher.
*She is a graduate of Sinagua High School.
*She played volleyball and basketball while in high school.
*She was named blogger of the year at the 2013 CPAC.
*She is a fan of the Green Bay Packers.
*Visit her official website: www.katiepavlich.com
*Follow her on Twitter, Facebook and Instagram.