Margaret Cho is an American comedian, actress, fashion designer, author, singer, and songwriter, best known by the public for her critiques of social and political problems, especially regarding race and sexuality. She came to prominence after creating and starring in the ABC sitcom All-American Girl. As an actress, she has starred in such films as Face/Off, It’s My Party, Fakin’ da Funk and Ground Control. Her television credits include ‘Til Death, 30 Rock, and Drop Dead Diva. She received the American Comedy Award for Best Female Comedian in 1994. Born Margaret Moran Cho on December 5, 1968 in San Francisco, California, her parents, Young-Hie Chun and Seung-Hoon Cho, were born in Korea. She attended and graduated from San Francisco School of the Arts, a San Francisco public high school for the arts. She was married to Al Ridenour from 2003 to 2015. 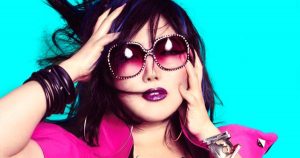 Margaret Cho Facts:
*She is of Korean heritage.
*Her parents moved to San Francisco from Seoul, Korea in 1964.
*One of Goldsea Asian American Daily’s 100 Most Inspiring Asian Americans of All Time.
*She’s bisexual.
*She used to work as a phone sex operator at age 15.
*She is a fan of adult film actor Jeff Stryker.
*Her favorite band is Canadian indie rock band Broken Social Scene.
*She is good friends with Steve Harvey, and Jane Lynch.
*Visit her official website: www.margaretcho.com
*Follow her on Twitter, YouTube, Facebook and Instagram.