Katie Stevens is an American television and movie actress and singer who finished in eighth place on the ninth season of American Idol and starred as Karma Ashcroft in the MTV series Faking It and Jane Sloan in the comedy-drama television series The Bold Type. Her movie credits include Friends and Romans, Polaroid, and Haunt. Born Katherine Mari Stevens on December 8, 1992 in Connecticut, to parents Clara and Mark Stevens, she has a brother named Ryan. Stevens graduated in 2010 from Pomperaug High School in Southbury. In October 2019, she married her boyfriend musician Paul DiGiovanni after five years of dating. 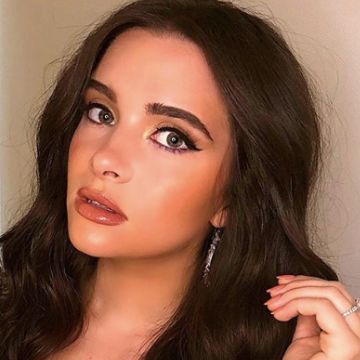 Katie Stevens Facts:
*Born on December 8, 1992 in Connecticut, she is of Portuguese descent.
*Her parents are Mark Stevens and Clara Francisco.
*She started acting and singing at age three, and went to Broadway camp during her childhood.
*She was named Westbury Outstanding Teen at the 2009 Greater Watertown Scholarship Pageant.
*She appeared in the 2009 season of American Idol.
*She sang Etta James’ song “At Last” when she auditioned for American Idol.
*She is fluent in both English and Portuguese. She can also speak Spanish.
*She splits her time between Nashville and Los Angeles.
*Follow her on Twitter, Facebook and Instagram.