Katja Herbers is a Dutch actress. She is best known for starring as Dr. Helen Prins in the WGN America drama series Manhattan, Emily Grace in the HBO science fiction drama series Westworld, and Dr. Kristen Bouchard in the CBS supernatural drama series Evil. Herbers is also notable for her recurring roles in the FX spy thriller series The Americans, the HBO mystery drama series The Leftovers, and the Discovery Channel drama series Manhunt: Unabomber. Her film credits include The Storm, Süskind, Brammetje Baas, and Loft. 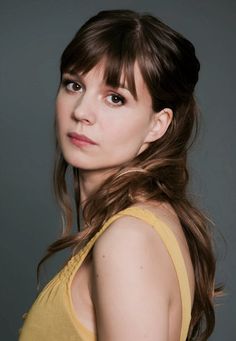 Born Katja Mira Herbers on October 19, 1980 in Amsterdam, Netherlands, she is the daughter of violinist Vera Beths and oboist and conductor Werner Herbers. Her mother remarried to cellist Anner Bylsma, and her father remarried to costume designer Leonie Polak, who introduced her to the theater. Herbers attended the Ignatius Gymnasium in Amsterdam, and studied psychology at the University of Amsterdam. She later moved to New York and attended HB Studio.

Katja Herbers Facts:
*She was born on October 19, 1980 in Amsterdam, Netherlands.
*She is the sister of documentary filmmaker and photographer, Carina Bijlsma.
*She had a Canadian au pair and learned to speak German, Dutch, and English growing up.
*She is fluent in English, German and Dutch.
*She divides her time among Los Angeles, New York, and Amsterdam.
*Follow her on Twitter and Instagram.