Kaylee Hartung is an American sportscaster who works as a reporter for CNN. She previously worked for ESPN where she contributed to the SEC Network, primarily on the show SEC Nation. She also worked as a reporter for the Longhorn Network. She spent 5 years for CBSNews.com as a reporter for the daily show ‘Washington Unplugged’. Born on November 7, 1985, in Baton Rouge, Louisiana, USA, her father was an automotive mechanic in New York and mother was a housewife. After graduating from Episcopal High School in 2003, she attended and graduated from Washington and Lee University in 2007 with a Bachelor of Arts degree in Journalism and Politics. She began her career as an assistant to Bob Schieffer after a summer internship with NBC. 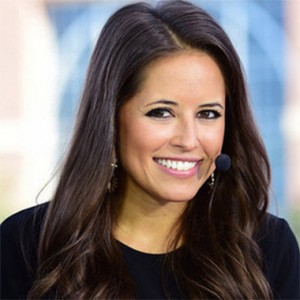 Kaylee Hartung Facts:
*She was born on November 7, 1985, in Baton Rouge, Louisiana.
*She graduated from Washington and Lee University where she majored in broadcast journalism and politics.
*She contributed to the ESPN’s coverage of SEC basketball and baseball, as well as football as an in-game reporter.
*She spent five years in the CBS News Washington bureau.
*Follow her on Twitter and Instagram.