Keaton Stromberg is an American singer-songwriter, musician, and composer who competed on The X Factor with the band Emblem3 alongside his brother Wesley. In 2013, Keaton released his debut single “Chloe (You’re the One I Want)”. Born on July 16, 1996 in Tarzana, Los Angeles, California, USA, to William Stromberg and Lariane Claire, he has a brother named Wesley, and two sisters, Brooke and Brianna. As a choir singer, Keaton performed at Carnegie Hall at age 14. 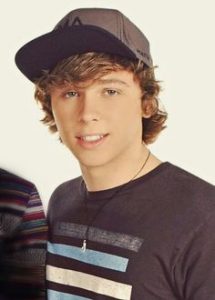 Keaton Stromberg Facts:
*He was born on July 16, 1996 in Tarzana, Los Angeles, California, United States.
*Son of Grammy Award-nominated producer William Stromberg.
*He learned to play piano at the age of 6.
*He auditioned on the X Factor UK at age 15.
*In 2012, he performed Alicia Keys’ song ‘No One’ on week three of The X Factor.
*His hobbies includes Enjoys recording music, surfing, and photography.
*Follow him on Twitter and Instagram.