South Indian actress who works in Malayalam Films and Television Serials. Varada made her film debut in a supporting role in the 2006 movie Vaasthavam, and played Nishitha in the 2008 film Sultan. She also played Dr. Lakshmi Sharan in the television series, Pranayam. Born Emi Mol on 29 April 1988 in Thrissur, Kerala, India, to Mohan Abraham and Pushpa Mohan, she has one younger brother named Eric. She completed her schooling from Sacred Heart C.G.H.S.S and St Joseph E.M.H.S.S. and graduation from University of Calicut. Her first lead role was in Sultan (2008) opposite Vinu Mohan. She has been married to actor Jishin Mohan since 2014. They have a son together. 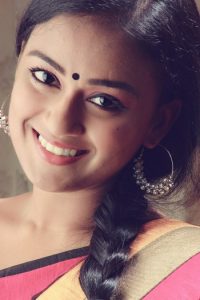 Varada Jishin Facts:
*She was born on 29 April 1988 in Thrissur, Kerala, India.
*She is a trained classical dancer who has performed since her school and college days.
*Her first lead role was in Sultan opposite Vinu Mohan.
*She hosted first two seasons of hit show, Patturumal on Kairali TV.
*Follow her on Facebook.