Kelly Monaco is an American model, actress, and reality TV personality. She is best known for her portrayal of Sam McCall on the American daytime drama General Hospital. She won the first season of the reality TV competition series Dancing with the Stars in 2005. She also played Livvie Locke on the soap opera Port Charles from 1997 through 2003. She appeared in the films BASEketball, Welcome To Hollywood, Idle Hands, and Mumford. Born Kelly Marie Monaco on May 23, 1976 in Philadelphia, Pennsylvania, USA, to parents Carmina and Albert “Al” Monaco, she has four sisters: Christine, Marissa, Carmina and Amber. Kelly began her career by appearing as Playboy’s “Playmate of the Month” in April 1997. She was in a long term relationship with Mike Gonzalez from 1991 until 2009. 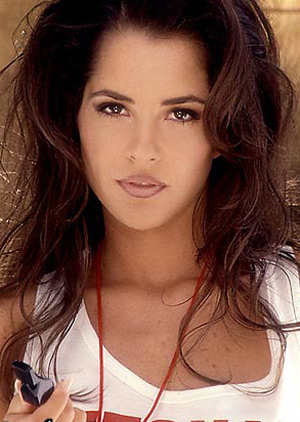 Kelly Monaco Facts:
*She was born on May 23, 1976 in Philadelphia, Pennsylvania, USA.
*She belongs to Italian descent.
*Growing up, she participated in soccer, swimming, track and softball, among other sports.
*She won the first season of Dancing with the Stars in 2005.
*She was one of the judges on Miss USA pageant (2009).
*Currently, she resides in West Hollywood, California.
*Follow her on Twitter and Instagram.