Kellyanne Conway is an American pollster, political consultant, and pundit who is currently serving as counselor to the president in the administration of U.S. President Donald Trump. She was the 2016 campaign manager for President Donald Trump. She’s been appeared on over 1,200 television shows for networks such as CNN and Fox News. She has been a guest on shows like Meet the Press and Good Morning America. Born Kellyanne Elizabeth Fitzpatrick on January 20, 1967 in Atco, New Jersey, to parents Diane and John Fitzpatrick, she is of Irish descent on her father’s side, and of Italian descent on her mother’s side. Her parents divorced when she was three years old. She was raised by her mother, grandmother and two unmarried aunts in the Atco section of Waterford Township, New Jersey. She graduated magna cum laude with a Bachelor of Arts in political science from Trinity Washington University. She studied at Oxford University and was elected to Phi Beta Kappa. She married attorney George T. Conway III on April 28, 2001. They have four children: Claudia, George IV, Charlotte, and Vanessa. 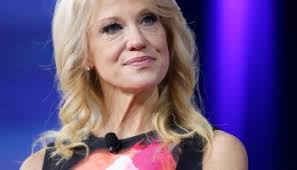 Kellyanne Conway Facts:
*She was born on January 20, 1967 in Atco, New Jersey, USA.
*She holds a law degree, with honors, from George Washington University Law Center.
*She became the campaign manager for Donald Trump on August 1, 2016.
*She founded the polling company, inc. (sometimes referred to as The Polling Center), a full-service public opinion and market research firm, in 1995.
*Follow her on Twitter.