Kelsea Ballerini is an American country pop singer and songwriter, best known for her debut single “Love Me Like You Mean It”, which debuted on the Country Airplay chart in October 2014. Ballerini released her debut album, The First Time, in 2015, followed by her second album, Unapologetically in November 2017. She received a nomination for Best New Artist at the 2017 Grammy Awards. Born Kelsea Nicole Ballerini on September 12, 1993 in Mascot, Tennessee, USA, she is an only child with no siblings. She started taking dance lessons when she was 3, at Premiere Dance Studio in Seymour Tennessee and stopped ten years later. She started songwriting when she was 12. She completed her schooling from Central High School in Knoxville, Tennessee and Centennial High School in Franklin, Tennessee. She also attended Lipscomb University for two years until she pursued a musical career. In December 2016, she got engaged to Morgan Evans. They married on December 2, 2017. 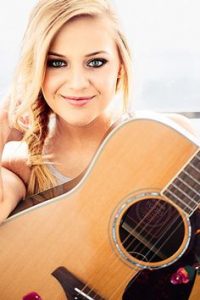 Kelsea Ballerini Facts:
*She was born on September 12, 1993 in Mascot, Tennessee, USA.
*She used to sing in the school and church choirs.
*She signed with the record label “Black River Entertainment” at 19.
*In 2014, she was named one of Country Music Television’s Next Women of Country.
*Her debut album, The First Time, went gold in the US.
*She became engaged to singer Morgan Evans in December 2016.
*Visit her official website: www.kelseaballerini.com
*Follow her on Twitter, Google+, YouTube, Facebook and Instagram.