Mehmood Aslam is a Pakistani actor of stage, film and television. He is best known for the television work on series such as Din, Janjaalpura, Bulbulay, Landa Bazar, Daray Daray Naina, Mann Mayal, Uraan and Ladies Park. He has also appeared in the films Sarmaya, Strawberry, and Teefa in Trouble. Born on December 1, 1953 in Lahore, Pakistan, his father, Mohammad Aslam, was a head master and art teacher at Muslim Model High School, Sant Nagar, Lahore. He is married to Amber Nosheen, with whom he has a son, Jibran Mehmood. 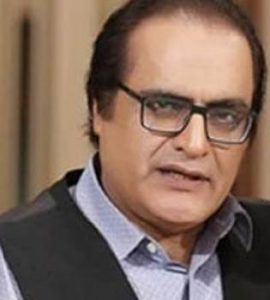 Mehmood Aslam Facts:
*He was born on December 1, 1953 in Lahore, Pakistan.
*He played Mehmood Sahab in the comedy serial ‘Bulbulay’.
*He has a son named Jibran Mehmood.