Kendall Jenner is an American television personality and fashion model. She rose to fame after appearing on the E! reality TV show Keeping Up with the Kardashians that she shares with her family members. She has also worked with such designers as Marc Jacobs, Chanel, Diane Von Furstenberg, and many others. Born Kendall Nicole Jenner on November 3, 1995 in Los Angeles, California to Kris and Caitlyn Jenner, (formerly known as Bruce Jenner), she was raised with one younger sister, Kylie, and eight half-siblings: Kourtney, Kim, Khloé, Rob, Brody, Casey, Burt, and Brandon. She began modeling at the age of fourteen, signing with Wilhelmina Models on July 12, 2009. She was educated at Sierra Canyon School and Yorkshire High School. She made her runway debut at Sherri Hill’s Spring 2012 Fashion Show. Kenny has a perfect body which measures breast 34, waist 24 and hip 34. She has a height of 5 feet and 10½ inches which is around 179 cm. She wears a size 10 shoe and her zodiac sign is Scorpio. 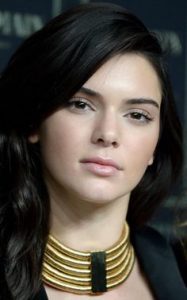 Kendall Jenner Facts:
*She was born on November 3, 1995 in Los Angles, California.
*She was a cheerleader in high school.
*She began her modeling career at the age of fourteen.
*She walked in the 2015 Victoria’s Secret Fashion Show.
*She was ranked #47 on Maxim’s annual Hot 100 issue on (2014).
*In 2011, she became a brand ambassador for Seventeen Magazine.
*The Jenner sisters launched a clothing line called Kendall & Kylie.
*She is good friends with Taylor Swift, Gigi Hadid, Cara Delevingne, and Karlie Kloss.
*She takes the top World’s Highest-Paid Model on the Forbes top-earning models list in 2017.
*Visit her official website: www.kendallj.com
*Follow her on Twitter, Facebook, YouTube, and Instagram.