Rabia Butt is an actress and model from Pakistan. She portrayed Jia in the 2016 film Hijrat, directed by Farooq Mengal, opposite Asad Zaman, Noman Ejaz and Wiam Dahmani. She has also appeared in several television commercials. Butt has won 2 Lux Style Awards for her work in Pakistan’s fashion industry. Born on February 26, 1990 in Lahore, Punjab, Pakistan, she completed her schooling from Lahore and graduated with a bachelor’s degree in Mass Communications. She started her career as a model for Maria B and has appeared for several advertisements under leading brands. She made her film debut in 2016 as Jia in Hijrat. 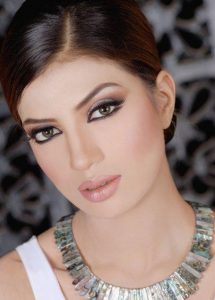 Rabia Butt Facts:
*She was born on February 26, 1990 in Lahore, Punjab, Pakistan.
*She began her career as a model.
*In 2012, she won the Lux Style Award for Model of the Year.
*She made her film debut in Hijrat (2016)
*She was also featured in the music video of Chal Bulleya by Meekal Hasan Band in 2009.
*Follow her on Twitter and Instagram.