Kendra Wilkinson is an American model, television personality and writer. She is best known for being one of Hugh Hefner’s three girlfriends and for her appearance on the E! reality television series “The Girls Next Door”, on which her life in the Playboy Mansion was documented. She began hosting her own reality series, Kendra, in June 2009. She also starred in the WE spin-off series Kendra on Top. Born Kendra Leigh Wilkinson on June 12, 1985 in San Diego, California, to Patti and Eric Wilkinson, she was raised by her mom and her grandma. She belongs to Polish, English, Irish, and German descent. She graduated from Clairemont High School in 2003. She married football player Hank Baskett at the Playboy Mansion in 2009, and the couple had a son named Henry Randall in December 2009, and a daughter named Alijah Mary in May 2014 before getting divorced in 2018. 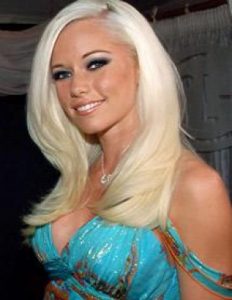 Kendra Wilkinson Facts:
*She was born on June 12, 1985, in San Diego, California.
*She was eight years old when her parents divorced.
*She played for the area softball league on the Clairemont Bobby Sox team for 6 years.
*She used to work as a bartender before being discovered by Hugh Hefner.
*She was one of Hugh Hefner’s ‘Playboy’ girlfriends.
*She had breast implant surgery at the age of 18.
*She is a huge fan of hip-hop music.
*Follow her on Twitter, Facebook and Instagram.