Stella McCartney is a British fashion designer. The daughter of former Beatles member Sir Paul McCartney and American photographer and animal rights activist Linda McCartney, Stella is best known for her hatred of leather and her celebrity-studded clientele. She received the VH1/Vogue Designer of the Year Award in 2000. Born Stella Nina McCartney on September 13, 1971 in London, England, she is the daughter of the legendary Beatles singer Paul McCartney and his late wife, Linda. Stella designed her first jacket at age 13. She studied at Central St. Martin’s College of Art and Design. She has been married to Alasdhair Willis since 2003. They have two sons named Miller and Beckett and two daughters named Reiley and Bailey. 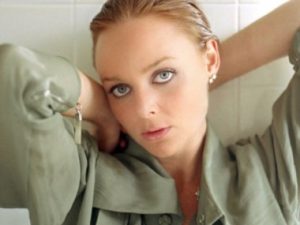 Stella McCartney Facts:
*She was born on September 13, 1971 in London, England.
*She was named after both of her maternal great-grandmothers.
*She is a vegetarian like parents Paul and Linda and sister Mary.
*She designed Madonna’s wedding dress in 2000.
*She is an active member of PETA (People for the Ethical Treatment of Animals).
*She is friends with actress Gwyneth Paltrow, Liv Tyler and Kate Hudson.
*Visit her official website: www.stellamccartney.com
*Follow her on Twitter, Facebook and Instagram.