Kevin Frazier is an American television personality who was a correspondent on Entertainment Tonight during 2004-2011, and is now co-host of Entertainment Tonight. He is also the founder and owner of the urban entertainment website HipHollywood.com. He has appeared as a guest-star in several television series such as America’s Next Top Model, Flavor of Love Girls: Charm School and Hell’s Kitchen. Born Kevin Timothy Frazier on May 20, 1964 in Maryland, USA, to parents Alice and Nat Frazier, he was educated at Hammond High School and Morgan State University. He has been married to Yasmin Cader since November 25, 2006. They have two sons, Reece and Shane. He also has a son, Tony from a previous relationship. 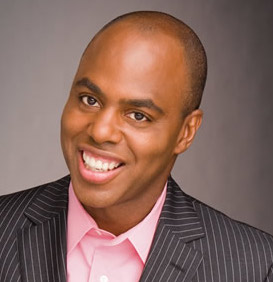 Kevin Frazier Facts:
*He was born on May 20, 1964 in Maryland, USA.
*He was the first to host both Dan Patrick studios on the East and West coasts.
*From 2004 to 2011, he served as weekend co-anchor/correspondent on CBS’s Entertainment Tonight.
*In 2008, he founded HipHollywood.com, an online web site for urban entertainment news.
*In October 2010, he was added to Versus College Football Central studio staff.
*Follow him on Twitter, Facebook and Instagram.