Kevin Huerter is an American professional basketball player who plays for the Atlanta Hawks of the National Basketball Association (NBA) at the shooting guard position. He played college basketball for the Maryland Terrapins. Huerter was voted to the All-Rookie Second Team at the end of the 2018–19 NBA season. 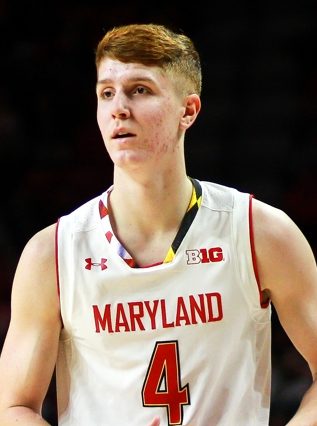 Born Kevin Joseph Huerter on August 27, 1998 in Albany, New York, to parents Erin and Tom Huerter, he has a brother named Thomas Jr. and two sisters named Meghan and Jillian. Huerter played at Shenendehowa High School in Clifton Park, New York, a suburb of Albany located in Saratoga County, and led the school to its second state championship, set the state scoring record and, as a senior, was named Mr. New York Basketball.

Kevin Huerter Facts:
*He was born on August 27, 1998 in Albany, New York, USA.
*His father, Tom, played college basketball for Siena College, and his brother, Thomas Jr., has also played for them.
*He played baseball as a child.
*He was selected 19th overall by the Atlanta Hawks in the first round of the 2018 NBA draft.
*His basketball hero is Dwyane Wade, and he wears jersey #3 in his honor.
*Follow him on Twitter and Instagram.