Kiernan Shipka is an American actress. She is best known for portraying Sally Draper on the AMC period drama series Mad Men from 2007 to 2015, and as B. D. Hyman on the FX anthology series Feud: Bette and Joan (2017). Kiernan has also done voice work in The Legend of Korra, Sofia the First, American Dad!, Family Guy, and Neo Yokio. Her films credits include Very Good Girls, One & Two, Fan Girl, and The Blackcoat’s Daughter. In 2018, she stars as Sabrina Spellman on Netflix’s Chilling Adventures of Sabrina. Born Kiernan Brennan Shipka on November 10, 1999 in Chicago, Illinois, to Erin Ann and John Young Shipka, a real estate developer, she has a sister. Kiernan’s family moved to Los Angeles, California, when she was six to support her acting career. She made her film debut in Dimension (2007). 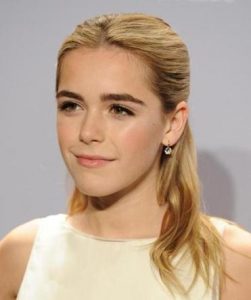 Kiernan Shipka Facts:
*She was born on November 10, 1999 in Chicago, Illinois.
*She is of Irish descent on her mother’s side.
*Her name “Kiernan” means ‘Son of a lord’.
*She began ballroom dancing classes at the age of 5, and began modeling in commercials as a baby.
*Time magazine named her one of “The 25 Most Influential Teens of 2014”.
*She has a black belt in Korean martial arts, taekwondo.
*She has two German Shepherds.
*Visit her official website: www.kiernanshipka.com
*Follow her on Twitter, Facebook and Instagram.