Kiki Bertens is a Dutch professional tennis player who achieved a career-high singles ranking of World No. 4 on May 13, 2019. Turning professional in 2009, Bertens has won ten singles titles and ten doubles titles on the WTA Tour including 2018 Western & Southern Open and 2019 Mutua Madrid Open. She is widely regarded as a clay-court specialist, but also is successful on hard courts. Born on December 10, 1991 in Wateringen, Netherlands, to parents Doré and Rob Bertens, she has two sisters, one older and one younger. Kiki grew up in the town of Berkel en Rodenrijs and began playing tennis at age 6, at ATV Berkenrode, a tennis club where her uncle and aunt played. In November 2019, Bertens married her physiotherapist Remko de Rijke. 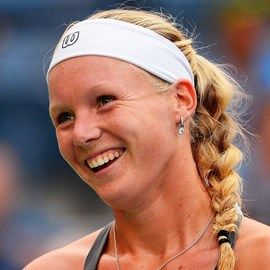 Kiki Bertens Facts:
*She was born on December 10, 1991 in Wateringen, Netherlands.
*She started playing tennis from the age of 6.
*She turned pro in 2009.
*Visit her official website: www.kikibertens.nl
*Follow her on Twitter and Instagram.