Kristen Stewart is an American actress, best known for the role of Bella Swan in The Twilight Saga film series. She has also starrted in the films Catch That Kid, Zathura, Panic Room, Zathura, Still Alice, In the Land of Women, Personal Shopper, Adventureland, Into the Wild, Charlie’s Angels, and The Messengers. The world’s highest-paid actress in 2010 and 2012, her accolades include a BAFTA Award and a César Award. Stewart made her directorial debut with the 2017 short film Come Swim. Born Kristen Jaymes Stewart on April 9, 1990 in Los Angeles, California, to parents Jules Mann-Stewart and John Stewart, she has an older brother, Cameron Stewart, and two adopted brothers, Taylor and Dana. She was educated at A.E. Wright Middle School in Calabasas, California until eighth grade, and was homeschooled for grades 9-12 due to her busy schedule. She had a highly publicized relationship with her Twilight co-star Robert Pattinson from mid-2009 to 2013. In 2019, Stewart began dating Dylan Meyer. 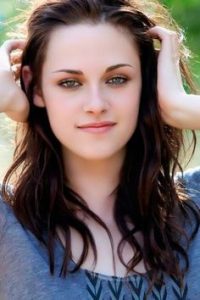 Kristen Stewart Facts:
*She was born on April 9, 1990 in Los Angeles, California, USA.
*Her mother is Australian.
*She started acting when she was eight years old.
*She made her debute in the Disney Channel film The Thirteenth Year at the age of eight.
*She earned a Cesar Award for Best Supporting Actress for her role in the 2014 film Clouds of Sils Maria.
*She was named as “The Movie Fanatic’s Hottest Young Actress” in 2008.
*Her favorite vampire film is The Lost Boys (1987).
*She has three dogs: Cole, Bernie and Bear. Also has a cat named Max/Jella.
*She identifies as a feminist.