English socialite, fashion designer and entertainer Kimberley Garner Biography, Family, Height, Weight, Age, Measurements will be discussed here. Kimberley Garner personal details can be checked here. She appeared in the reality TV series Made in Chelsea from March 2012 to November 2012.

Kimberley Garner is an English socialite, swimwear designer, television personality and actress. She was a regular cast member of the acclaimed British reality series Made in Chelsea from March 2012 to November 2012. She is director of Kimberley London Ltd, and has developed numerous home properties in London and Miami.

Kimberley dated musician James Arthur for a couple of months in 2012. She was also romantically linked to a posh blonde man, Richard Dinan in 2012. 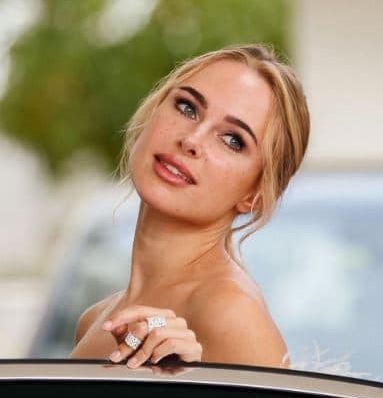 Kimberley Garner Facts:
*She was born on February 10, 1991 in Kensington, London, United Kingdom.
*She first achieved fame as a regular cast member of the reality show Made in Chelsea, which she joined in March 2012, and left in November of the same year.
*She launched her first swimwear collection in May 2013.
*She took the female lead in the action thriller movie Sweetheart in 2019.
*She is best friends with Oliver Proudlock.
*She was raised in the Anglican faith and goes to Holy Trinity Brompton Church weekly.
*Visit her official website: www.kimberleylondon.com
*Follow her on Twitter, Facebook, TikTok and Instagram.