Louisa Chirico is an American tennis player who achieved a career-high singles ranking of World No. 58 on October 24, 2016, and a doubles ranking of world No. 184 on March 6, 2017. Turning professional in 2012, Chirico has won four singles and two doubles titles on the ITF Circuit. She made her Grand Slam debut at the 2015 French Open after being awarded a wildcard into the event by the USTA. Chirico won her first WTA Tour match at the 2015 Washington Open, defeating Heather Watson.

Born on May 16, 1996 in Morristown, New Jersey, to parents Carole and John Chirico, she is of Korean descent on her mother’s side. She started playing tennis at the age of 7. 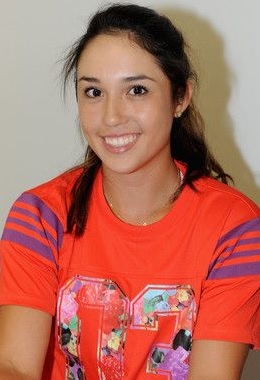 Louisa Chirico Facts:
*She was born on May 16, 1996 in Morristown, New Jersey, United States.
*She started playing tennis at the age of seven.
*She became a professional player in 2012.
*She has a career-high singles ranking of No. 58.
*Follow her on Twitter, LinkedIn and Instagram.