Kimberly Dos Ramos is a Venezuelan actress, model and singer, is the daughter of Portuguese immigrants. From an early age, she began her acting career with television commercials and promotions. She has starred in such telenovelas as Grachi, Que el Cielo Me Explique, El Rostro de la Venganza, Marido En Alquiler and Tierra de reyes. She played Graciela Palacios in Mexican Telenovela, Vino el amor (Along Came Love). She made her television show debut in the Venezuelan telenovela, Todo Por Tu Amor in 1997. She was nominated for both Mexican and Argentine Kids’ Choice Awards for her performance in Grachi. Born Kimberly Dos Ramos De Sousa in Caracas, Venezuela, on April 15, 1992, she is the daughter of Portuguese immigrants. She has two brothers, Lenny Dos and Lance Dos, both are actors. 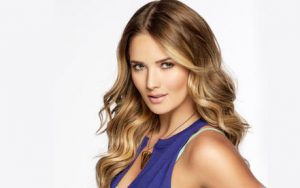 Kimberly Dos Ramos Facts:
*She is of Portuguese heritage.
*She began her career at the age of four in television commercials and photos for catalogs.
*Her two brothers, Lenny Dos and Lance Dos both are actors.
*She was a cheerleader while in high school.
*Follow her on Twitter, Facebook and Instagram.