Kimberly Guilfoyle is an American television journalist who works for Fox News. Currently, Kimberly is the co-host of the series The Five on Fox News Channel. Before appearing on TV, she was a prosecuting attorney in San Francisco and Los Angeles. Born Kimberly Ann Guilfoyle on March 9, 1969 in San Francisco, California, to Mercedes and Anthony Guilfoyle, she is of Irish descent on her father’s side, and of Puerto Rican descent on her mother’s side. Her mother died due to leukemia when she was just ten, and she and her younger brother were raised by a single father. She is a 1994 graduate of University of San Francisco Law School. In January 2006, Kimberly joined Fox News Channel where she served as host of the weekend show The Lineup. She is also a legal analyst for the Fox News Channel. She has been married twice (Gavin Newsom and later Eric Villency) and has a son named Ronan. 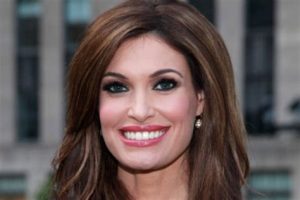 Kimberly Guilfoyle Facts:
*She was born to a Puerto Rican mother, Mercedes and Irish father, Anthony.
*She was raised by a single father.
*She is a former Victoria’s Secret model.
*She was once the First Lady of San Francisco.
*She used to work at a delicatessen, where she was a hostess, waitress and, then, manager.
*She is a former high school teacher, and once modeled Bridalware for Macy’s.
*Her favorite TV show is The Love Boat (1977).
*She is a boxing fan.
*She is a Howard Stern fan.
*Follow her on Twitter, Facebook and Instagram.