Travis Scott is an American rapper, singer, songwriter, and record producer. Travis released his debut studio album, Rodeo, in 2015 and was led by the hit single “Antidote”, which achieved remarkable success, reaching at #3 on Billboard 200 and #1 on Top Rap Albums in the U.S., followed by his second album, Birds in the Trap Sing McKnight, in September 2016. He released his debut EP titled Owl Pharaoh in May 2013. Born Jacques Webster on April 30, 1992 in Houston, Texas, USA, to Wanda Yvette (Flood) and Jacques Bermon Webster, he grew up in Missouri City. He went to Elkins High School before going to the University of Texas at San Antonio and later dropped out to pursue his music career. He signed his first major label with Epic Records in 2012. Since April 2017, he has been in a relationship with reality star Kylie Jenner with whom he has one daughter, Stormi. 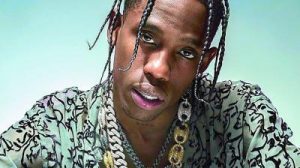 Travis Scott Facts:
*He is the son of Wanda Yvette and Jacques Bermon Webster.
*He was raised by his grandmother.
*He has a daughter with his partner, entrepreneur, socialite, television and media personality Kylie Jenner.
*He started playing drums at the age of 3 after his father bought him a set.
*He got interested in playing beats after listening to Kanye West’s music.
*He signed his first major label with Epic Records in 2012.
*He is friends and has collaborated with Camila Cabello.
*In 2013, he collaborated with Big Sean on the song “10 2 10 (Remix)”
*Visit his official website: www.travisscott.com
*Follow him on Twitter, YouTube, Facebook and Instagram.