M. Shadows is an American singer, songwriter, and musician. He is best known as lead singer of the heavy metal band Avenged Sevenfold. He is also a founding member of the band. Avenged Sevenfold is known for its diverse rock sound and dramatic imagery in album covers and merchandise. The other members of the band are rhythm guitarist and backing vocalist Zacky Vengeance, lead guitarist and backing vocalist Synyster Gates, bassist and backing vocalist Johnny Christ, and drummer Brooks Wackerman. Born Matthew Charles Sanders on July 31, 1981 in Huntington Beach, California, to Kim and Gary Sanders, he has a younger sister, Amy Marie. He was educated at Huntington Beach High School. He has been married to Valary Sanders since October 17, 2009. They have two sons together. 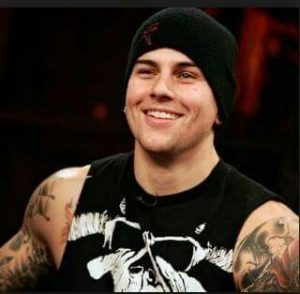 M. Shadows Facts:
*He was born in Huntington Beach, California, USA as Matthew Charles Sanders.
*In 1999, he formed Avenged Sevenfold, along with middle school friends Zacky Vengeance, Matt Wendt, and The Rev.
*He was ranked #3 in the list of Top 25 Greatest Modern Frontmen by Ultimate Guitar in 2017.
*He was influenced by the music and fashion of Ozzy Osbourne.
*He used to play the piano before he began to sing in his first band, “Successful Failure”.
*He was featured on a song by The Dirty Heads.