Kimiko Glenn is an American actress and singer. She is best known for playing Brook Soso on the Netflix comedy series Orange Is the New Black, for which she received three Screen Actors Guild Awards. She played Dawn Pinket in the Broadway musical Waitress, and Harlow in the web series Liza on Demand. She has also done voice work in Voltron: Legendary Defender, Spider-Man: Into the Spider-Verse, Sofia the First, and DuckTales. Her notable film credits include Construction, Nous York, Hair Brained, and the 2019 romantic comedy film Can You Keep a Secret?. Born Kimiko Elizabeth Glenn on June 27, 1989 in Phoenix, Arizona, USA, to parents Mark and Sumiko, she has one sister named Amanda. She is of German, Scottish, and Irish descent on her father’s side, and of Japanese descent on her mother’s side. Glenn started acting at the Valley Youth Theatre in Phoenix, and several other local theaters, when she was ten years old. She made her film debut in the comedy film, Nous York (2012). She received her education at Desert Vista High School and the Interlochen Arts Academy boarding school in Interlochen, Michigan. She also attended the Boston Conservatory, but dropped out after a year. She has been in a relationship with actor Sean Grandillo since February 2015. 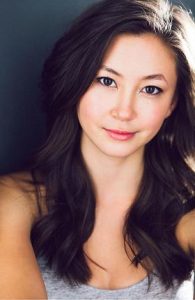 Kimiko Glenn Facts:
*She was born on June 27, 1989 in Phoenix, Arizona, USA.
*Her ancestry includes Japanese, German, Scottish, and Irish.
*As a child, Kimiko was very obnoxious.
*She is fond of singing.
*In February 2015, she started dating actor Sean Grandillo.
*Follow her on Twitter and Instagram.