Kojii Helnwein is an Irish actress, musician and model. She is notable for her appearances in The O’Brien’s, Project Runway, Models of the Runway and Terra Incognita. She has been featured in numerous magazines, including, Fit Pregnancy, Cosmopolitan, Women’s Wear Daily, Elle, BPM, Prudence, Tatler and Vogue. She has also appeared in adverts and catalogues for companies such as, O.P.I., Louis Verdad, Ed Hardy, Got2b, Coca-Cola, Toni and Guy and Gap. Her runway clients have included Prada, Eduardo Lucero, A-Wear, Smet, Jimmy Choo, Jeffrey Sebelia, GenArt and Whitley Kros. Born Kojii Wyatt on January 8, 1981 in Tallaght, Ireland, her father Enda Wyatt was the co-founder, songwriter and bassist of Irish rock band An Emotional Fish. Kojii studied acting in Los Angeles at The Acting Center and at The Irish Film Academy in Ireland. She is married to Fine Art Photographer, Cyril Helnwein, with whom she has three children. 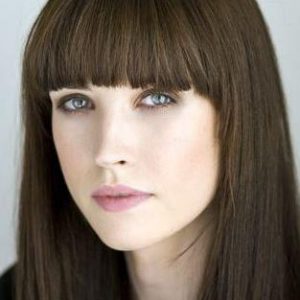 Kojii Helnwein Facts:
*She was born on January 8, 1981 in Tallaght, Ireland.
*She is the daughter of musician Enda Wyatt of 1980s Dublin (Ireland) rock group “An Emotional Fish”.
*She worked as a freelance Stage Manager in theatres across Ireland from the age of 18 until she was 21.
*Her first modelling job was for John Rocha.
*She sings, writes music and lyrics, and plays guitar.
*Her own Photography was published in Kai’outi Magazine as part of a 10 page interview in 2015.
*She enjoys riding bike.
*She is the daughter-in-law of renowned Austrian artist Gottfried Helnwein.
*Visit her official website: www.kojiihelnwein.com
*Follow her on Twitter, Facebook and Instagram.