German glamour model and actress who won Miss Frankfurt 2005, Miss Darmstadt 2006 and Queen of the World/Internet 2007. She was also Miss Supermodel at Miss Hawaiian Tropic International 2007. In 2008, Lohfink participated in the third cycle of Germany’s Next Topmodel. She has featured in many international men’s magazines such as Playboy, Penthouse and FHM, and starred in a campaign for Redcoon with fellow Germany’s Next Topmodel contestant and model Micaela Schäfer in 2012. She has appeared in television shows such as Taff, Maischberger, mieten, Gülcan und Collien ziehen aufs Land, kaufen, wohnen, Das perfekte Promi-Dinner (German spin-off to Come Dine with Me), Die Alm, Bauer sucht Frau and Big Brother Germany as well as her own web series Gina-Lisa’s Welt and Gina-Lisa’s Best Buddy. Lohfink released her debut single, “Alles Klar” in 2010. 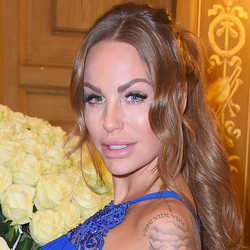 Gina-Lisa Lohfink Facts:
*She was born on September 23, 1986 in Seligenstadt, Germany.
*Her parents separated when she was two years old.
*Following her high school graduation, she trained as a nurse and worked as a fitness trainer.
*She modelled for clothing label Southpole in 2006.
*She made her acting debut in 2008 in the television comedy show Putzfrau Undercover.
*She participated in the third season of Germany’s Next Top Model in 2008.
*She starred in an ad campaign for Sixt alongside centenarian actor Johannes Heesters in 2008.
*She founded Ginalisa Eyewear, a brand of sunglasses in 2009.
*She walked in New York Fashion Week for Heatherette designer Richie Rich for his collection A*MUSE in February 2010.
*She was featured in the music video for Loona’s single “El Tiburón”.
*She was the face of Venus, an erotic fair, promoting safer sex in 2012.
*Visit her official website: www.ginalisa-lohfink.de
*Follow her on Facebook and Instagram.