Kristen Bell is an American actress, best known for her starring role in the Rob Thomas television series “Veronica Mars.” She has also starred in Forgetting Sarah Marshall, The Good Place, Couples Retreat, When in Rome, Get Him to the Greek, Spartan, Heroes, Gossip Girl, Polish Wedding, and in the 2012 comedy Hit and Run. Born Kristen Anne Bell on July 18, 1980 in Huntington Woods, Michigan, USA, to parents Tom Bell, a television news director, and Lorelei Bell, a registered nurse, she is of German, Scottish and Irish descent on her father’s side, and of Polish descent on her mother’s side. She was educated at Shrine Catholic High School in Royal Oak, Michigan, and attended New York University’s Tisch School of the Arts. On October 17, 2013, she married her boyfriend of six years Dax Shepard following a three-year-long engagement. They have three children: Lincoln Bell Shepard, Delta Bell Shepard and Simon Kenneth Shepard. 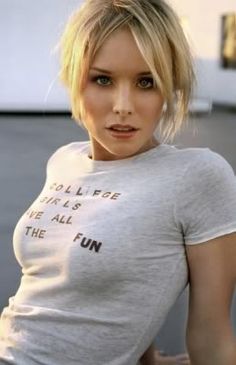 Kristen Bell Facts:
*She was born on July 18, 1980 in Huntington Woods, Michigan, USA.
*She belongs to Irish, German, Polish and Scottish descent.
*She was two years old when her parents divorced.
*During high school, she took part in drama and music club.
*Her role models are Kathy Bates, Toni Collette, and Tilda Swinton.
*She was named PETA’s World”s Sexiest Vegetarian in 2006 and 2013.
*She is an avid fan of the Detroit Red Wings hockey team.
*Bell started dating actor Dax Shepard in 2007. They became engaged in January 2010 and married on October 17, 2013.
*Follow her on Twitter, Facebook and Instagram.