Luke Kirby is a Canadian actor. He is known for his roles in television, such as Slings and Arrows, Tell Me You Love Me, Cra$h & Burn, Rectify, The Astronaut Wives Club, The Marvelous Mrs. Maisel, and The Deuce, and in the films Mambo Italiano, Luck, All Hat, Labor Pains, Take This Waltz, The Samaritan, Empire of Dirt, Touched with Fire, and Little Woods. Luke was born Luke Farrell Kirby on June 29, 1978 in Hamilton, Ontario, Canada, to American parents. His parents moved from New York, to Canada in 1974. He was educated at Chatham South School and studied drama at the National Theatre School of Canada, and graduated in 2000. His first feature film role was in the 2002 film Halloween: Resurrection. 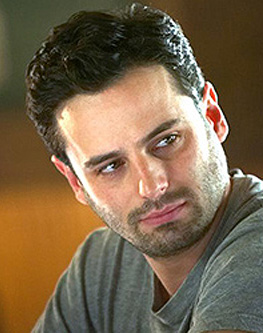 Luke Kirby Facts:
*He was born on June 29, 1978 in Hamilton, Ontario, Canada.
*He graduated from The National Theatre School of Canada in 2000.
*Born on the same date as Nicole Scherzinger.