Kristin Chenoweth is an American singer and actress. She is best known for her Broadway performances in You’re a Good Man, Charlie Brown and Wicked. She won a Tony Award for You’re a Good Man, Charlie Brown. She is also known for her performances in television, such as The West Wing, Pushing Daisies, Kristin, Glee, GCB, and Trial & Error, and in the films Bewitched, The Pink Panther, RV, Rio 2 and The Peanuts Movie. For her performance as Olive Snook on the ABC comedy-drama Pushing Daisies, she won a 2009 Emmy Award for Outstanding Supporting Actress in a Comedy Series. She released her debut solo album Let Yourself Go in 2001 via Sony Music Entertainment. Born on July 24, 1968 in Broken Arrow, Oklahoma, USA, she was adopted by Junie Smith Chenoweth and Jerry Morris Chenoweth when she was just 5 days old. After graduating from Broken Arrow High School in 1986, she received a bachelor’s degree in musical theater from Oklahoma City University, which she attended on a full scholarship to study voice. Afterwards, she studied for and earned a master’s degree in opera performance. She dated Charlie McDowell from April 2008 until February 2009. 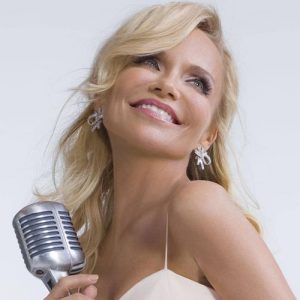 Kristin Chenoweth Facts:
*She was born on July 24, 1968 in Broken Arrow, Oklahoma.
*She was adopted by the Chenoweth family when she was just 5 days old.
*She was the second runner-up in the Miss Oklahoma pageant in 1991.
*In November 2011, she inducted into the Oklahoma Music Hall of Fame.
*Dolly Parton and Julie Andrews were her musical influences.
*She is good friends with Quentin Tarantino.
*She is friends with Heidi Klum, Patti LuPone, Sean Hayes, Idina Menzel, Robin Williams, Nicole Kidman, Danny DeVito, Ellen DeGeneres, and Matthew Broderick.
*Broke up with Lane Garrison in 2006.
*Visit her official website: www.officialkristinchenoweth.com
*Follow her on Twitter, YouTube, Myspace, Facebook and Instagram.